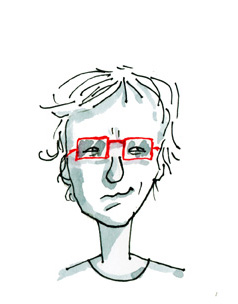 Cécile Bertrand was born in Liege in 1953. She studied painting in St Luc before starting an artistic career in many different sectors. As a painter and a sculptor, she took part in many exhibitions : she exhibited at the Cirque Divers in Liege in 1995, at the Michel Ray gallery in Paris several times in the 1990s and at the Botannique of Bruxelles in 2008.

She has been publishing books for children with a variety of publishers since 1981. Since 1990, she has been working for miscellaneous newspapers and magazines: Le Vif/L’Express, La Libre Belgique, Imagine Magazine, Axelle and Plus Magazine. Cecile Bertrand is a photographer, painter, sculptor, poster artist, comic strip writer and illustrator.  In 1999, she received the second Prize of the Press Cartoon Belgium and the Grand Prix in 2007 and 2011 for a cartoon published in La Libre Belgique.