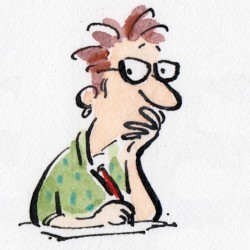 Cathy Wilcox was born in Sydney in Australia in 1963. She studied graphic arts at the Sydney College of the Arts from 1981 to 1984.

She lived in Paris from 1985 to 1987 where she worked as an illustrator and graphic designer for Anglophone magazines such as Paris Passion and Speakeasy (Fernand Nathan Editors). She also studied literature at the University Paris III.

In Sydney, she regularly draws socio-political cartoons for the daily Sydney Mornig Herald and she makes other publications with the Fairfax Media editor. She also makes illustration for children’s books.

She published two collections of cartoons and received several prizes such as the National Museum of Australia Prize for political cartoons in 2009 and two Walkley Awards (National Journalism Prize) in 2007 and 2013.