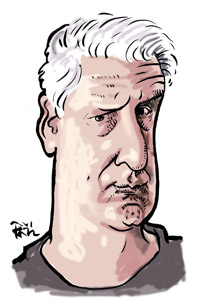 Avi Katz was born in Philadelphia, USA in 1949.

After studying in California he came to Israel in 1970 and decided to live there permanently. He started in painting and art teaching before turning to illustration full time. His drawings, ranging from the realistic to the caricature and comics have appeared in various magazines and newspapers in Israel and around the world. He has been the illustrator of the Jerusalem Report magazine since 1990.

He has illustrated some 200 books for children; his Illustrated Children’s Bible won the National Jewish Book Award im the USA and his books have received the Hans Christian Andersen Honors four times .

Read more about Avi Katz in the Illustration Magazine :