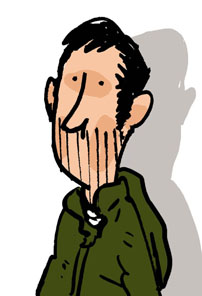 Aurel (Aurélien Froment) has been working as an editorial cartoonist since 2003. He was first published in newspapers in Montpellier, and began quickly to work for National newspapers.

His cartoons are regularly published in Le Monde and in the weekly newspaper Politis. He also draws for L’Infirmière Magazine and the monthly magazine CQFD.

Since 2007, he also publishes one graphic report a year in Le Monde Diplomatique, realized with the journalist Pierre Daum.