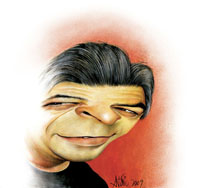 Antonio Antunes Moreira began his career in 1974 at La Republica in Lisbon. He has appeared regularly in the Portuguese newspapers and magazines : Diario de Noticias, A Capital, A Vida Mundial, O Jornal andExpresso since 1975. His most famous and controversial cartoon (John Paul II depicted with a condom on the nose) was published in 1992 in Expresso. Antonio is one of two founders of the World Press Cartoon and has received numerous international awards. He exhibits very regularly.