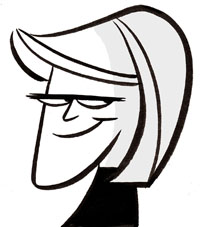 Ann Telnaes was born in Stockholm and became an American citizen when she was 13. A graduate of the Art Institute of California, she specialises in animation drawing and therefore quite naturally started with Warner Bros before working in the Walt Disney Studios. She then embarked on her career as a press cartoonist and collaborated on numerous publications such as The Washington Post, The New York Times and Le Monde. She sketches both American and international politics, but has a fondness for anything affecting the status of women in 2001. In 2001, she was the second woman to win the Pulitzer Prize for cartoons. She published her first book in 2004.