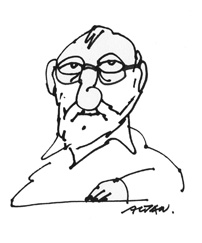 Known as Altan, Francesco Tullio Altan was born in 1942 in Treviso, Italy. Before embarking on cartoons he studied architecture, worked in television and film and finally found his niche in comic strips. In 1975 Altan began publishing his topical cartoons inL’Espresso, along with his drawings for children in Il Corriere dei Piccoli and his satirical vignettes in Linus. His political caricatures are published regularly inL’Espresso and La Repubblica.