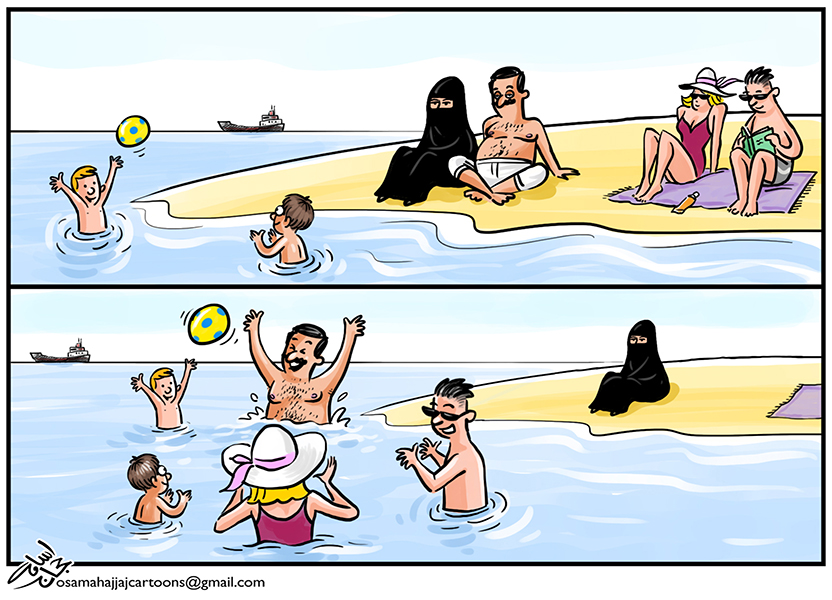 In May 2015, the Jordanian cartoonist Osama Hajjaj received several death threats from the Islamic state organization, on the social networks and by email, because of some of his cartoons.
The death threats started after Osama published in his newspaper (Al Rai) and on twitter one cartoon in which he wanted to denounce the oppression of women in countries where sharia is applied. The threats kept going after the publication of other cartoons such as one representing one terrorist taking a selfie with beheaded heads, another where he made God speak, and another one advocating for science instead of the “brain washers”.

The general context in which cartoonists work is not simple in the Middle-East. Indeed, the free press situation remains critical, between State repressions and intimidations from a part of the population and from the Islamic state organization. Jordan is only 143th in the 2015 World Press Freedom Index made by Reporters without Borders. Being a cartoonist in such a region is risky, and can be dangerous too often.

Furthermore, Osama was forced by his current employer, the advertising agency Rubicam & Young Advertising, to sign a letter in which he committed himself not to publish cartoons about religion and politics. When his newspaper Al Rai went bankrupt, his only source of revenue became this agency. Despite everything, Osama did not renounce to draw and express himself through his cartoons.