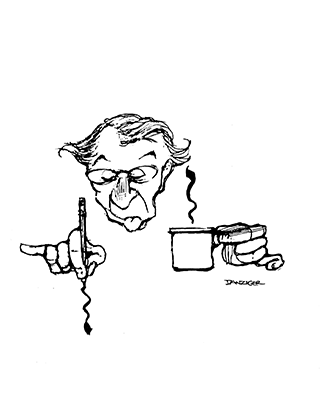 Born in 1943, Jeff Danziger has been an independent New York cartoonist for nearly 25 years. A veteran of the Vietnam War, in which he served as a U.S. soldier from 1967 to 1971, Danziger began his career as an illustrator for a local Vermont newspaper in 1971, earning a dollar per drawing.

He then worked for Christian Science Monitor from 1987 to 1997 and his cartoons were published in hundreds of newspapers around the world (The New York Times, The Washington Post, Wall Street Journal, Toronto Globe, Mail, Le Monde, China Daily...) and magazines such as Newsweek, Forbes, The New Yorker, and Texas Observer.

Today, he draws between six and ten cartoons a week on a wide variety of subjects, many of which are controversial. His favourite themes are electoral fraud, political figures and international relations. Highly representative of the talents of the American school, Jeff Danziger has succeeded in imposing an insolent editorial style.

He received the Thomas Nast Prize in 2008, the “Herblock” prize for editorial cartooning in 2006 and was awarded the “Overseas Press Award” in 1993. He now works with the Washington Post writers Group.