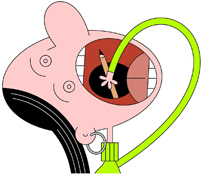 Cristina Sampaio lives in Lisbon where she works since 1986 as an illustrator and cartoonist for several magazines and newspapers in Portugal and abroad, namely Expresso, Kleine Zeitung, Courrier International, Boston Globe, Wall Street Journal and The New York Times.

She has also worked in animation, multimedia and set design and published several children’s books.

Her work has been shown in group and solo exhibitions in Portugal and abroad.

Among other awards, in 2002, 2005 and 2009 she received an Award of Excellence from the Society for News Design (USA). In 2006 and 2010 she received the Stuart Award for the best Portuguese press cartoon. In 2007 she received the first prize in the editorial category of the World Press Cartoon and an Honorable Mention in 2009.