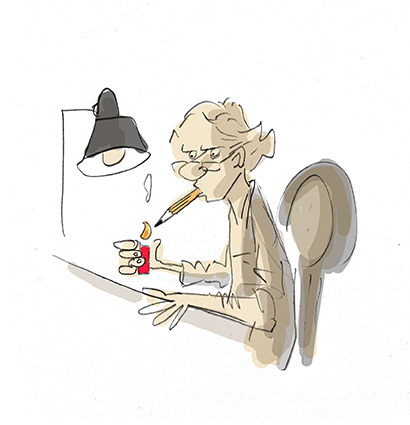 André-Philippe Côté is a Canadian scenarist and cartoonist. He was born in Quebec City in 1955 and started to get known thanks to his comics.

He firstly became interested in science-fiction and graphic research before publishing in the 1990s six albums of his comic books Baptiste le clochard, depicting a philosophical protagonist, and two innovative comics entitled Castello and Victor et Rivière. In the 2000s, he released three albums with his character Dr Smog, a strange psychiatrist.

Côté has been for a long time an illustrator for the humorous magazine Safarir and the daily newspaper of Quebec City Le Soleil for which he has also worked as an editorial cartoonist since 1997. Since this year, an annual collection of his best cartoons is published every year (De tous les Côté, Ed. La Presse) and Côté’s cartoons were displayed in three major exhibitions.

His caricatures are also often reproduced in Courrier International and Le Monde.