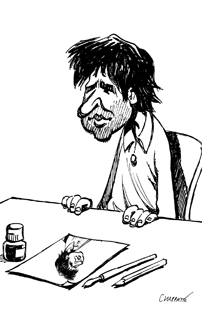 Patrick Chappatte, son of a Swiss father and a Lebanese mother, was born in 1967 in Karachi, Pakistan. He is a caricaturist and a comic-strip reporter. He began to work for Swiss newspapers before moving to New York where he stayed for a few years. He worked for New York Times and Newsweek.

He currently lives in Geneva and Los Angeles.

He draws for the front page of Geneva daily newspaper Le Temps, The International New York Times, Neue Zücher Zeitung and Yahoo ! France. He is also published in international newspapers.

Chappatte do reports made of cartoons, notably about the Ivory Coast rebels, Gaza and in the Elysée corridors.

In 2012, he becomes the first non-American person receiving the Thomas Nast Award given by the Overseas Press Club of America. He co-founded with Plantu the Swiss Foundation Cartooning for Peace which awards every two year an international prize to a brave cartoonist.