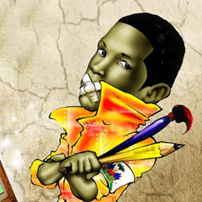 While he wanted to study fine arts and comics drawing, his parents made him learn Business Administration. Despite that, he began his career as an illustrator at RAJ Magazine in 2006.

Having a passion for breaking news, he works as an editorial cartoonist for Haitian Daily Le Matin since 2009. His cartoons are published in the frontpage.

Bousiko also worked as a cartoonist for Le Nouvelliste newspaper since 2012 and for advertising agencies since 2009.