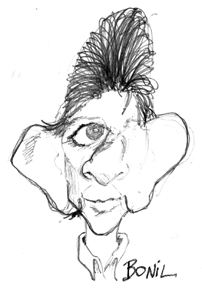 Xavier Bonilla, known as Bonil, is an Ecuadorian press cartoonist who was born in 1964. He studied sociology before dedicating himself to editorial humoristic cartooning.

Since 1985, he has drawn in numerous national newspapers. He currently works for the main Ecuadorian newspaper (El Universo) and several magazines (Nuestro Mundo, Rocinante, Gestion).

He was awarded many prizes and he exhibited all over the world but his caricatures, which denounce the corruption and incompetence of the Ecuadorian government, aroused President of Ecuador Rafael Correa’s wrath and led him to face several trials.

In February 2015, as he was going out of court at the end of another trial, admirers and activists for freedom of speech welcome him with “Yo soy Bonil” (“I am Bonil”) placards.