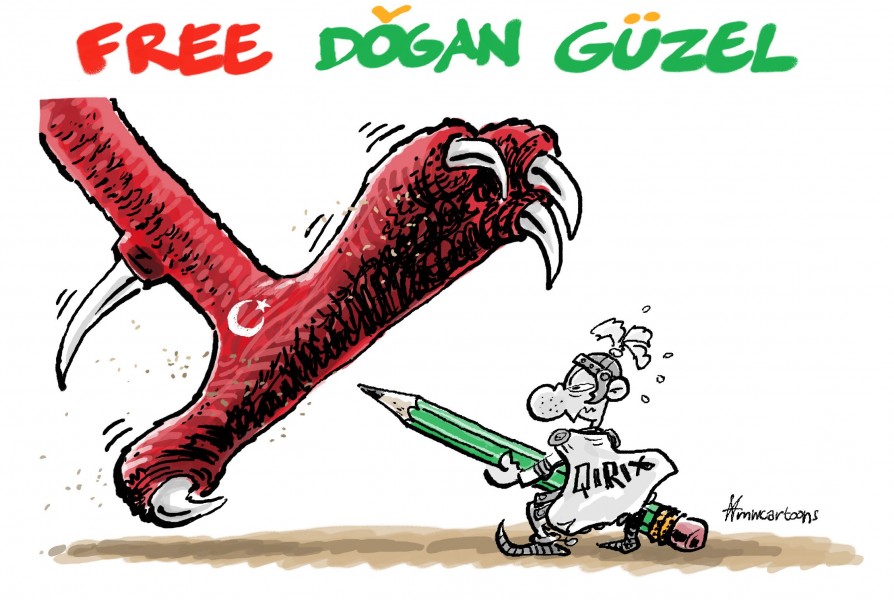 A Turkish court in Istanbul ordered the temporary closure of leftist pro-Kurdish newspaper Ozgür Gündem on Tuesday, August 16th. The newspaper is said to have acted as the de-facto news outlet of the Kurdistan Workers Party (PKK), at war with the regime.

The police intervened in the newspaper’s office in Beyolu and placed in custody around 20 journalists – among them cartoonist Dogan Güzel. Photos, largely shared on social media, show the cartoonist in a torn shirt in police custody.

Ozgur Gundem, whose print version has a daily circulation of around 7.500, focuses on the Kurdish conflict and has faced dozens of investigations, fines and the arrest of correspondents since 2014. Güzel is a regular contributor to the journal, using in his drawings the satirical character Qirix he created.

He was sentenced to 17 years in prison and spent a year and half in jail for drawing cartoons critical of the Turkish’s regime. He was given amnesty in 1999 along with the “Courage in Political Cartooning”award from Cartooning Rights Network International (CRNI). He moved to Spain where he was given political asylum and then citizenship. He now lives between Istanbul and Seville.

A spontaneous campaign began on social media following Güzel’s imprisonment – a symbol of the press freedoms deterioration in Turkey. Cartoonists from all over the world, including members of Cartooning for Peace, are sharing their drawings in support of Güzel and his colleagues.

Cartoonist Dogan Güzel was among the 22 journalists released last Friday by the Turkish authorities. In an interview Dogan gave just after his release to journalist Manuel Martorell, he explained how violent the police interpellation was.

Güzel said that policeman were very aggressive and insulted journalists; they shoved them down stairs and beat them. “They insulted us shouting: ‘Armenians, Jews, sons of Lenin; you are going to find out about the strength of the Turkish state,’” Güzel said. Though free, they still face charges of ‘resistance, insult and assault to authority’.