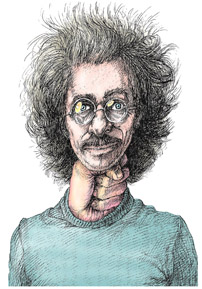 Mikhail Zlatkovsky was born in 1944 in Tambov (Russia) into the family of a veteran of the Soviet army. He studied at the Moscow Nuclear Physics Institute.

In 1971, he becomes a free-lance cartoonist. Between 1999 and 2001, he moved to the United States before returning to Russia where he became the artistic director of a publishing conglomerate. Zlatkovsky currently lives and works as a political cartoonist in Moscow.

He won more than two hundred awards worldwide and is considered by his peers as one of the greatest among them. His drawings are large frescoes where he deals with the major themes of freedom and democracy. Today, he is forbidden to draw Vladimir Putin, which prompts him to miss the liberal era of Boris Yeltsin.