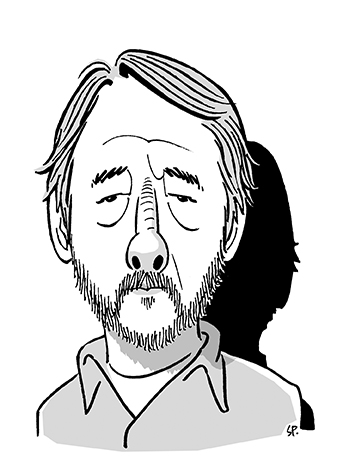 Semih Poroy (born 1954) left the Istanbul University Law School in his senior year to commit himself to the world of cartoons. His first works appeared in Akbaba (The Condor), Turkey’s oldest humor magazine, in 1975.

In 1988, he became a full-time member of the daily Cumhuriyet, to which he had been drawing as freelance since 1977. His comic strip Harbi has been running in this newspaper since 1989. For the last ten years, he has been drawing the full-page Feklavye a satire of the literary world, for Cumhuriyet’s well-known Book Supplement.

In addition to many articles on cartoons and humor published in art and culture periodicals, Poroy has five published cartoon collections (the last ones in 2008 : Feklavye and Ohne Worte).

Poroy was elected as the chairman of the Cartoonists Society of Turkey in 1984 at the national cartoonists congress.