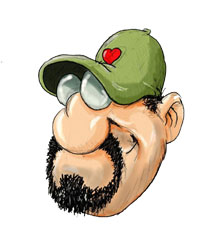 Le Hic ou Hic began his career as a press cartoonist at L’Authentique in 1985. He then worked at Le Matin, Le Jeune Indépendant and has been drawing since 2006 for Le Soir d’Algérie. Currently his drawings can be found in the Algerian news daily El Watan and in Courrier International. Le Hic has been sued many times, especially when he worked at Le Matin. He won 8 lawsuits for defamation of character and insulting the president of the republic with a suspended sentence of three months in prison in 2005 for one of his cartoons.

Since 2011, Le Hic has been the editor-in-chief and cartoonist of the comic strip magazine BENDIR.