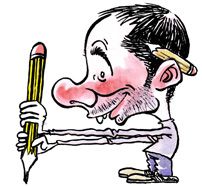 Kap (Jaume Capdevila) is a Spanish cartoonist best known for his cartoons in La Vanguardia and in El Mundo Deportivo. His cartoons appear also in the pages of other spanish and international magazines (among others, Siné Mensuel or Courrier International).

He published ten compilation books of his cartoons and received several international awards.

Kap is also a specialist in satirical Spanish press of the XIX and XX centuries, and author or co-author of many works about the history of Spanish cartoon, caricature and many subjects referring to humorous drawing and satirical press.