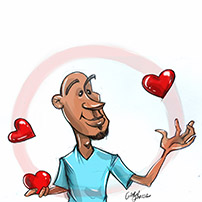 Born in USA in 1970, Gary Javier moved to Puerto Rico at the age of 10, where he found his passion with the arts and sports.

He dismissed a career in the field of law and decided to develop his artistic talent. After being graduated in Arts at the University of Puerto Rico, he began to be known as cartoonist for the weekly newspaper El Norte.

After collaborating with some capital publications he was recruited as an illustrator for the Primera Horanewspaper, which stands out as a pioneer in the digital cartooning. One of his mottos in life is that “art is for sharing” and every saturday he used to teach dozens of young people in his workshops about cartoons. He also makes workshops in hospitals, communities and jails.

In December 2010, he made something that had never been seen in history before because he drew cartoons for 48 consecutive hours, event for which he obtained the Guinness World Record of the Longest Caricature Marathon in the world during which he drew 635 people. Thanks to his work, he was given several prestigious awards, and he has exhibited around the world.

Javier is currently the President of the Association of cartoonists of Puerto Rico.