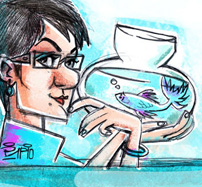 She works with several newspapers such as Shargh, Etemad, Farhikhtegan and a news website Khabaronline. She has acted as a referee in many international cartoon competitions in Iran and also in 29th Aydin Dogan cartoon competition in Turkey. She also received several awards for her cartoons during festivals in Iran and has been one of the 4  hranian cartoonists who were awarded by Kofi Annan in 2012.

Despite being a very active member in the executive committee of the international cartoon biennials that take place each year in Tehran, Firoozeh boycotted the ninth event to protest against the violence after the presidential elections in 2009.