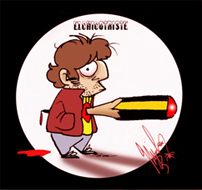 Miguel Villalba Sánchez, known as Elchicotriste, is not only a clinical psychologist but also a humorist, an illustrator, a graphic designer, a mural painter and an author of comic books.

He works with many local and international newspapers such as Universal Post (UK), Il Tempo (Italy), El Triangle (Spain), Siné Mensuel (France) and several Catalan newspapers. He currently publishes on the websites Tot Terragona, Noticies Tarragona and in the magazine El Còmic. Added to that, he draws cartoons in live for the TV Channel programm « Els Matins » on the Catalan channel TV3.

Elchicoriste was awarded many prizes by organisations such as the Fundación Víctor Mora, SOS Racismo and the « Concurs de tires còmiques de Barcelona ». In 2015, he received the Unesco Prize for World Press Freedom and the Colombian Prize of the Cartagena Data Festival.

He is an active member of the collectives « Yaka-Yaka » and « El web negre » and he founded the collective Delirópolis, the NGO « Cartoonists without borders » and the annual event « Comic books week in Tarragone ».