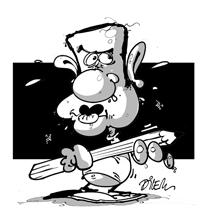 Ali Dilem began his career as a cartoonist with the daily Le Jeune Indépendant in 1990 before joining Le Matin in 1991 and La Liberté in 1996.

He also works for the French programme Kiosque on TV5. The cartoonist is known for his outspokenness against the regime of Bouteflika, cartoons which have led him to face more than sixty trials.

Dilem was made a chevalier of arts and letters on the 11th of October 2010. He had already been awarded around twenty times in his career. He notably was given the International Press Cartoon Prize 2000.