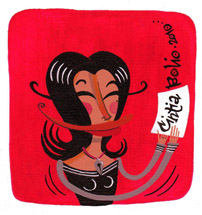 Cintia Bolio was born in Mexico City in 1969.

She began her career in editorial cartoons and comics by publishing his work in various newspapers and magazines such as El Chamuco, La Jornada, Milenio, El Centro, etc. Feminist, Cintia Bolio is a gender issues specialist. Her cartoons have also been exhibited worldwide.

She was also one of the 12 cartoonists attending the « Unlearning Intolerance » Symposium, at the UN in October 2006.