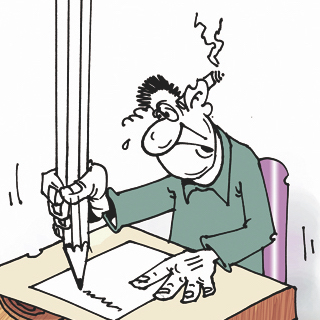 Baki (Boukahalfa Abdelbaki) is an Algerian cartoonist, born in 1977 in Batna.

He graduated in 2007 from Fine Arts School in Algiers before working for ten years with the Algerian Arabic speaking daily newspaper Echorouk. He has also collaborated with the Algerian weeklies Le Monde Culturel, Al Raya, Al-Atlasand Sawt Al-Ahrar.

Meanwhile, he also works in the editorial staff of “Bonjour Algeria” program (broadcast on Canal Algeria).

He has participated in various exhibitions in Algeria and around the world, including the exhibitions “Immigration clandestine”, “Le trait rouge” and “Football … a communication media” (Berlin).