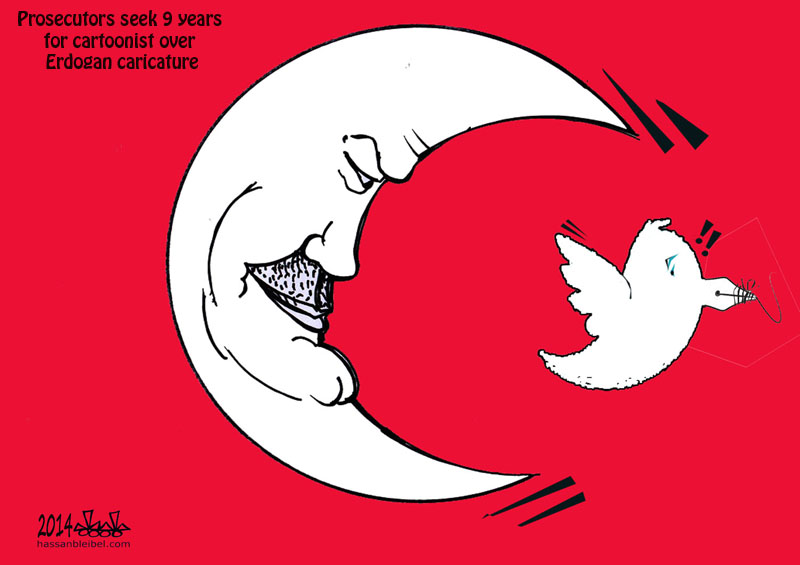 Following the publication of one cartoon in the Turkish newspaper Cumhuriyet daily on the 1st of February 2014, cartoonist Musa Kart was charged and he is now facing 9 years imprisonment because President Erdogan submitted a complaint. This latter relies on a controversial article of the Penal Code that refers to « insult to the Head of State crime ». Using this legal article is not new, however it has become almost systematic during Erdogan’s presidency. Since he was elected in August 2014, Erdogan has brought 236 prosecutions.

The cartoon in question shows two robbers stealing money from a vault. One of them tells the other : « No rush, our watchman is a hologram ». The watchman is President and former Prime Minister Recep Tayyip Erdogan who showed up as a huge hologram during a meeting. The cartoon refers to a money laundering scandal in December 2013, involving many people close to Erdogan (Prime Ministers’ sons, pro-Erdogan businessmen) who is supected of having turned a blind eye.

Musa Kart had already made a cartoon that showed Erdogan as a cat (in 2005) entangled in strings. It depicted the many political problems Erdogan faced –notably with religious schools that refused to change their status at the time.

Musa Kart is not optimistic when it comes to perspective for freedom of speech in Turkey (journalists and cartoonists endure many threats and intimidation…) but he wants to continue to draw. Many cartoons were made by cartoonists from all over the world to support him.