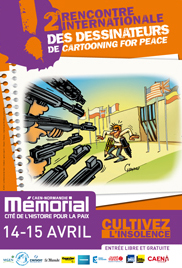 The first meeting takes place on April, 22 and 23 of 2011 and gathers 35 cartoonists of the association in order to exchange points of view about their purpose and their job. A meeting with the public is also organized with a conference given by Reza (photograph), Antoine Sfeir, Leïla Shahid, Régis Debray and Isabelle Fougère and sketched in live by the cartoonists. This event was also the occasion to give the first Honoré Daumier Prize to the Chinese cartoonist Xia for her excellent work.

During the 2nd meeting, on April, 14 and 15 of 2012, more than 4000 people were there to take part in the debates animated by Jean Leymarie (France Info Radio) and Sylvère-Henri Cissé (Canal + channel) ! The conferences given by Robert Solé (former manager of the Monde des Livres), Jean-François Kahn (founder of Marianne) and Vanessa Rousselot (film director) were sketched by funny and incisive cartoons made in live by the 23 cartoonists who had been invited to the event. For this second edition, the Tunisian cartoonist Willis from Tunis won the Honoré Daumier Prize for her striking caricatures on Tunisian news.