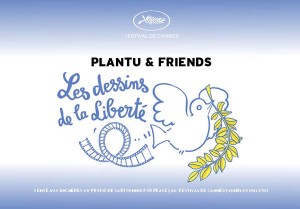 This event, co-organized by Piasa, involves cartoonists WILLIS FROM TUNIS (Tunisia), DILEM (Algeria), KICHKA (Israel) and PLANTU (France) and is conducted by the auctioneer James Fattori. For this unprecedented meeting between editorial cartoons and films, original collector artworks are put on sale. The funds raised benefit Cartooning for Peace to support their action.

The exhibition linked to the benefit event is presented at the Palais des Festivals, during the whole festival. A selection of eighty cartoons portrays legendary films, the film industry and famous film directors such as Fellini, Bergman, Spielberg or Hanneke, in a light and satirical tone. Some cartoons also remind us that cinema creativity is still threatened in countries such as Iran or Algeria. If a film director has a problem with authorities, cartoonists from all over the world will take his defense and report freedom of expression violations.

Freedom of expression is under the spotlight to defend artistic freedom!