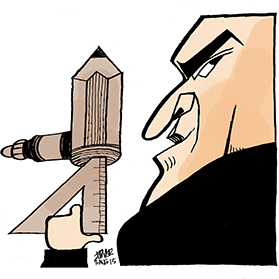 On the 11th of February 2015, Malaysian cartoonist Zulkiflee SM Anwar Ulhaque alias « Zunar » was arrested by policemen after releasing a cartoon on Twitter. His tweet condemned the five year-imprisonment sentence imposed on former vice-Prime Minister Anwar Ibrahim who had been charged charged with sodomy. Zunar criticized the lack of justice and the political nature of the sentence, which was generated by current Prime Minister Najib Razak –disguised as a judge in the cartoon.

Zunar is now charged with 9 counts for having posted tweets that criticize Malaysian judicial system and shows it as a biased system that serves Prime Minister Najib Razak’s interests. Zunar is facing a 43 year-imprisonment sentence. His trail was postponed on September 2015.

Cartoonist Rights Network International (CRNI) and Amnesty International launched a petition in July 2015. It calls on Prime Minister to drop the charges held against Zunar and the « Sedition Act » -which goes back to the time of colonialism and affects freedom of expression because it facilitates prosecutions against journalists and cartoonists and it prohibits any kind of speech considered as seditious.

On September 21, 2015, Zunar was invited by Cartooning for Peace to the International Seminar on Cartoons and Freedom of Speech “Press Cartoons: a state of affairs“.